A recent decision by the United States Court of Appeals for the 10th Circuit, Maehr v. United States Department of State, should strike fear in the hearts of all Americans. It poses a serious threat to what should be considered the most fundamental of human rights: the right to freedom of movement – the right to physically remove oneself from a place. The place in question is the United States.

In a nutshell, in Maehr, the 10th Circuit holds that international travel is not, in fact, a fundamental right. To the contrary, the court holds that there are few limitations on the ability of the U.S. government to restrict its citizens from leaving the country (including the ability to live overseas), and that most court challenges to any such restrictions will likely, and should, fail.

The significance of Maehr was discussed in a recent article by Boris Ryvkin appearing in the National Review. This article correctly describes the consequences of the decision with respect to the issue of taxation – how taxpayer debt to the IRS can result in the loss of one’s U.S. passport with the consequence of being unable to leave the United States, or, if already outside the United States, then of being unable to cross an international border. The article also mentions the larger and even more consequential implications of Maehr for any international travel by a U.S. citizen regardless of their status with the IRS, stating: “[I]f upheld by other federal courts, the holding dramatically expands the ability of Congress and the IRS to prevent Americans from leaving the U.S. to travel abroad or to permanently relocate.”

Ryvkin is entirely correct in this observation. But his article only touches the surface. It is important to go further, to more fully examine the serious threat that Maehr poses – not just to those who currently live outside the United States (again, regardless of their status with the IRS) but also to all Americans who entertain the notion that, as Americans, they will be able to leave the country at the time and for the reasons of their choosing.

Right or mere “aspect of liberty?”

As the court explains, a “rational basis” review is not much. It is:

no more than a ‘reasonable fit’ between governmental purpose . . . and the means chosen to advance that purpose…. Our rational basis review is highly deferential toward the government’s actions,” and “[t]he burden is on the plaintiff to show the governmental act complained of does not further a legitimate state purpose by rational means. [emphasis added]

In contrast, if the basis for review is “strict scrutiny,” the law in question must (i) have been passed to further a “compelling governmental interest,” and (ii) be narrowly tailored to achieve that interest. The government has the burden of proving that its challenged policy is constitutional.

The 10th Circuit’s discussion (pages 32-38) regarding the “aspect of liberty” to travel takes place independent of the reason(s) for the government’s restriction on international travel – it could be for any reason(s), including reasons unrelated to taxation. The only reason the 10th Circuit accords might call for greater scrutiny of restrictions on international travel is if First Amendment rights are concerned.

In a nutshell, and as stated above, the 10th Circuit holds that there are few limitations on the ability of the U.S. government to restrict its citizens from leaving the country, and that most challenges to any such restrictions will likely, and should, fail. Maehr both clarifies and solidifies a series of federal cases allowing the U.S. government to restrict international travel for a variety of reasons, most of which are unrelated to taxation (the cases are discussed in the 10th Circuit’s decision).

Americans do not have human rights

Maehr contains a concurring opinion by Judge Carlos Lucero (pages 12-28). These pages are worth reading (it is easy reading). Lucero argues that (i) international travel is not only a right but a “prerequisite to the freedom guaranteed by the Constitution,” “is implicit in the basic liberty protected by due process,” and “is all but indispensable for the exercise of another long-established right: the right of expatriation,” and (ii) restrictions upon the right to international travel should be subject to intermediate scrutiny. This concurring opinion explains well the threat that the majority opinion poses to all international travel, not just to travel by those with debts to the IRS.

This is a dangerous decision by the 10th Circuit. It poses a serious threat to all Americans.

(1) The United States has signed the Universal Declaration of Human Rights. Its Article 13 states: “Everyone has the right to leave any country, including his own, and to return to his country.”

(2) The United States has signed and ratified the International Covenant on Civil and Political Rights. Its Article 12(2) states “Everyone shall be free to leave any country, including his own.”

(3) The United States has signed and ratified the International Convention on the Elimination of All Forms of Racial Discrimination. Its Article 5(d)(ii) states: [The Parties undertake to guarantee to everyone] the right to leave any country, including one’s own, and to return to one’s country. 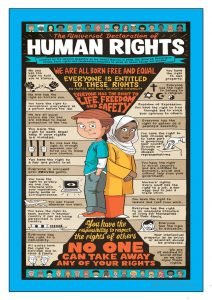