Renunciations of US citizenship: Correcting the myths perpetuated in recent media coverage

The purpose of this post is to correct the following three current myths about US citizenship renunciation:

1. That US citizenship renunciations are driven by political considerations and/or dissatisfaction with any political party.

2. That US citizenship renunciations are in any way related to the Covid-19 pandemic.

“All Roads Lead To Renunciation!”

Over the past several months there has been a plethora of articles published in mainstream media about the striking increase in the numbers of renunciations of US citizenship as published in the Federal Register on 8 May, 6 August, and 29 October 2020.

The attention is warranted. However, for the most part, the various explanations offered for the increased numbers miss the mark. Some miss by a little. On the other hand, some are so divorced from reality they raise questions about journalistic integrity.

Many of the articles cite the same source for their information: a Mr Alistair Bambridge, of Bambridge Accountants, based in New York. This firm’s website as well as its 6 August 2020 press release offer a bizarre, contradictory, and mostly unfounded explanation for the increased numbers:

This explanation is so convoluted it is difficult break it down to address its various parts, and impossible to do so briefly. But here goes:

Why have so many renounced US citizenship?

Let’s begin with Bambridge’s reference to “onerous tax reporting” and his additional references to the “intrusion” of financial reporting being “too complicated.” While these references are vague, they do contain the largest nugget of truth in Bambridge’s explanation. That is, most Americans who renounce US citizenship do so either because of difficulties remaining US tax compliant, and/or because of problems they experience accessing bank and other financial accounts because of their US citizenship.

Indeed, the dramatic increase in the number of persons renouncing US citizenship can be traced back not to 2020 (as Bambridge implies) but to a decade earlier: to 2010 with the adoption of the Foreign Account Tax Compliance Act (FATCA), and especially to 2014 with FATCA’s widespread implementation. It is because of FATCA that many persons living overseas have found themselves unable to access banking and other financial services, or able to access only the most basic accounts. This includes not only persons who identify as being American, but also those who do not. Referred to as “Accidental Americans,” these are persons who are US citizens either because they were born in the United States or because they have at least one US-citizen parent, but they have lived most if not all of their lives outside the United States.

While many details about how the extraterritorial application of US taxation and banking policies affect US citizens living overseas could be discussed, the gist is that these policies have been the principal motivating factor for thousands of renunciations of US citizenship since 2010. These renunciations have occurred under two different presidential administrations – Obama’s and Trump’s. Unless the incoming Biden Administration credibly signals an intent to reduce the burden of these policies on Americans living overseas – notably by moving to a residency-based tax system or by repealing FATCA – there is no reason to expect that the pace of the renunciations will significantly decrease during the next four years and beyond. To the contrary, if the Biden Administration follows through on proposals to double the rate for GILTI, or to strengthen the enforcement of FATCA – as examples of policies that would have continued detrimental effect on Americans living overseas – clairvoyant powers are not necessary to predict that renunciations will continue at the same if not an increased pace. (How those renunciations are reported in the Federal Register is another question because, as we will see below, there can be and often is considerable delay in their reporting). 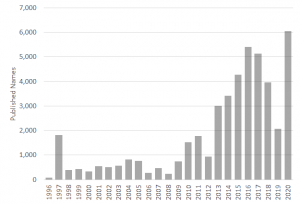 (Both charts compiled by Mark Fitzpatrick based on the Wikipedia tracking of Section 6039g of the Federal Register.)

Why has the number of reported renunciations recently increased?

The above provides a general explanation for why so many more Americans have renounced US citizenship since 2010. A further explanation is needed: why did the number of reported renunciations decrease in 2018 and 2019, only to shoot back up to the highest number ever in 2020?

Bambridge’s first explanation for this is Trump’s handling of the pandemic. This is an outlandish assertion with zero basis in fact. That being said, there is a connection between the pandemic and the increased reporting, as follows:

Many who had renounced their US citizenship in 2018 and 2019 observed that their names had not appeared in any Federal Register list. This suggested underreporting of the actual numbers, if not serious underreporting.

It is clear, then, that the motivations for the renunciations reported in the Federal Register in 2020 are wholly unrelated to the Covid-19 pandemic.

Who renounces US citizenship?

Renunciations are made by persons who already live outside the United States. In nearly all cases, persons who renounce are also a citizen of at least one other country, if not two or more other countries. This is because without additional citizenship, renunciation of US citizenship would leave the person stateless, a deplorable condition that most potential renunciants find unacceptable and that many US consular authorities seek to prevent.

A decision to renounce US citizenship is not made quickly, nor is it a decision that can be implemented quickly – and even less quickly when the consulates are closed. Behind every act of renunciation is months – if not years – of reflection and planning. The pandemic, as well as Trump, are temporary. Renunciation – in stark contrast – is forever. Understood in this context, it is farcical to suggest that suddenly in the first part of 2020 thousands of Americans living outside the United States made the snap decision to renounce US citizenship in a pique of anger over the “political climate” in the United States – a place where they did not live.

It is unfortunate that much of the media coverage of the renunciations relies so heavily upon the multiple erroneous assertions contained in Bambridge’s press release with little, if any, independent research or verification. The result, as noted above, is a plethora of articles that rightly draw attention to the issue of renunciation but that replicate Bambridge’s faulty analysis and that, in some instances, embellish it with their own seemingly pre-determined – but false – narrative pinning renunciations of US citizenship on Trump’s domestic policies.

“How Donald Trump is Driving Americans to Renounce Their Citizenship,” by Arwa Mahdawi, The Guardian, 12 August 2020:  The lack of independent research and verification done for this article beggars belief. This article parrots Bambridge in a way that glosses over the tax issues and entirely ignores the banking issues faced by Americans living overseas in order to place the blame for the renunciations squarely upon Trump and his handling of the pandemic. The article makes the nonsensical argument that Americans want to renounce US citizenship – an act that would mean loss of the right to enter the United States – because Trump might ban US citizens from entering the country if they are believed to have Covid-19. In other words, the article claims that Americans are so angry at the possibility of being banned from entering the United States during a temporary period of time that they are taking steps to make it even easier for the United States to ban them…during the rest of their lives. Taken as a whole, the article is so preposterous – so devoid of logic and fact – it is difficult to understand why The Guardian keeps it online.

“A Record Number of People Are Giving Up their US Citizenship, According To New Research. Here’s Why,” by Alaa Elassar, CNN, 10 August 2020: This article also parrots Bambridge without it seeming to have occurred to the article’s author to conduct any independent research or verification. The article cites the higher number of renunciations reported in 2020 with the explanation that people have “just had enough of everything,” notably with Trump’s handling of the pandemic. The article fails to make any mention of the fact that the closure of US consulates during the year because of the pandemic meant that few, if any, of the renunciations reported in 2020 could have actually occurred in 2020. The article concludes by repeating Bambridge’s prediction that the mere fact of the re-election of Trump – entirely divorced from any consideration of tax or banking policies – will be sufficient to motivate a “wave” of more Americans to renounce US citizenship.

A third article, “How the Coronavirus Made It Nearly Impossible to Renounce U.S. Citizenship” (by Adam Taylor, Washington Post, 31 October 2020), almost got it right, but this article contains two serious errors: (1) it repeats Bambridge’s erroneous assertion that Americans renounce US citizenship because they “have had enough of President Trump,” as well as the ludicrous suggestion that renunciations can also be attributed to “pandemic chaos” that has “weakened the prestige of an American travel document;” and (2), in seeking to make a “correction,” it wrongly states that the data released by the IRS includes persons who have given up permanent US residency. In fact, while immigration authorities are required to report to the IRS persons who relinquish their green card, those persons are not included in the lists the IRS publishes in the Federal Register under the title  “Quarterly Publication of Individuals, Who Have Chosen To Expatriate, as Required by Section 6039G.” Those lists contain only the names of persons who have renounced/relinquished US citizenship.

Additional articles with dishonorable mention, because they parrot Bambridge with little, if any, independent research and verification are as follows:

“The Number Of Americans Renouncing Their Citizenship Is At Record Highs,” by Niall McCarthy, Forbes, 11 August 2020.

Who gets it (mostly) right

Here are a few of the articles that get it right – or at least right enough it seems petty to quibble with the minor errors:

“Americans are Renouncing US Citizenship in Record Numbers – But Maybe Not for the Reasons You Think,” by Brett Goodin, The Conversation, 9 September 2020.

“The US is Taxing Expatriates Out of Their Citizenship,” by Ann Marie Miller & Alice Calder, Washington Examiner, 18 October 2020.

This article merits special mention because, of all the mainstream media articles that have come to our attention, it describes the situation in the most accurate manner:

“Latest Quarterly Citizenship Renunciation Data Plunges – But Not Everyone Thinks It Matters,” 20 November 2019.

“Yet More Surprises in Latest (and Largest Ever) Quarterly U.S. Renunciation Names List, Renounce-Data-Watchers Say,” 11 May 2020.

“U.S. Citizenship Renunciations at Near Stand-Still Globally, as Demand Reported to Spike Ahead of Election,” 30 July 2020.

Nov 9, 20205 Comments on Renunciations of US citizenship: Correcting the myths perpetuated in recent media coverageBlog

5 thoughts on “Renunciations of US citizenship: Correcting the myths perpetuated in recent media coverage”